The State of CeDefi

CeDefi is an attempt to bring the world of decentralized finance to the masses through centralized entities. With regular Defi, protocols are often very complex in the eyes of most users. The route is usually as follows:

As you can see, this pathway will create a barrier to entry for those who may not be crypto experts. When most users start in crypto, they only feel comfortable buying and selling assets. Even with the complexities of Defi, the current amount of total value locked (TVL) in all Defi apps is around $72 billion, once reaching highs of around $250 billion. With the overall crypto market cap of $900 billion, just under 10% of all assets are locked in Defi protocols.

Cross-chain transfers and Defi are overwhelming for most new users. With CeDefi, users could now set up an account on BlockFi or Celsius to earn a yield on some of the most widely known assets. It is as simple as making an account on a CeDefi platform, buying an asset within the account, and enabling lending within the account to earn yield. The simplicity of offering a one-stop-shop, coupled with placing assets in a somewhat regulated entity, many retail and institutional investors no longer had to keep their money on the Defi sidelines.

Additionally, many decentralized DEXes and protocols lacked liquidity for big-money investors, so CeDefi wasn’t just the main option, but rather the only option. In addition, Defi protocols often lacked security, with billions of dollars being stolen across the Defi ecosystem. By signing up to use Defi, users had the mindset that if something bad happened, they were on their own. CeDefi attempted to help users feel safe while earning yield.

The critics of CeDefi always come back to the popular phrase, “not your keys, not your coins”. When using BlockFi or Celsius, users who supply assets for lending often didn’t know how their assets earned interest. Earn 8% on BTC? Sweet! Earn 10% on stablecoins? Awesome! I don’t have to set up a wallet that may be expensive and require attention to store an asset safely? Great! Many users naively deposited assets into these platforms without understanding how these companies worked, putting trust in a platform because it appeared to be mainstream.

For CeDefi companies, they borrow your assets and give them to a company that wants to borrow the assets. If you supply BTC, an institution will take out a loan with your BTC and pay a fee back to the platform. The platform would then give some of that fee to users. So where does the risk come from? The risk comes into play when companies are unable to repay these loans. In bull markets, most borrowers will be making money and are likely able to pay back loans and everyone goes home happy. In the case of markets crashing and loans getting liquidated, these borrowers may be unable to pay, and CeDefi platforms are still on the hook to pay interest to lenders. This is where issues start to arise.

Before BlockFi, Celsius, and other CeDefi institutions kept making news for negative reasons, these companies were presumed to be trailblazing companies that would shape and aid the mainstream adoption of the crypto industry. Today, that claim is still true, but it is not shaping the future in the way many hoped or expected. These institutions have rather shaped the industry in terms of what not to do. Prior to all this negativity, these platforms were perceived to be some of the highest growth companies out there.

At the peak of CeDefi, companies were raising money at some very high valuations. In March of 2021, BlockFi finished a funding round with a valuation of $3 Billion, and it was reported it completed another funding round months later at a $5 billion evaluation. At the time of the valuation, BlockFi increased its staff from 100 to 500, increased monthly revenue from $1.5 million to $50 million, and the value of assets on the platform from $1 billion to $15 billion all within one year. The client base also grew to over 225k retail users and 200 plus institutional investors. Celsius, a BlockFi competitor was experiencing similar growth and was once valued at $7-10 billion as recently as 2022. It even once held over $20 billion in assets under management (aum). Voyager was also once valued in the billions. Sign-ups were so rapid that for a period there was a waitlist for users signing up. Across all of these platforms, the excitement of crypto had many first-time crypto users chasing extra yields on their assets.

The downfall of these CeDefi institutions will be remembered in the history books of crypto. When the contagion of the Luna collapse spread to 3AC, 3AC helped spread the contagion to CeDefi platforms. The 3AC situation has been the largest contributor to the stress of these platforms.

As mentioned earlier, lenders rely on loans being paid back to generate revenue and pay back those who are supplying their assets. With 3AC taking out massive loans, some of these CeDefi lenders are taking it on the chin. Many have been left wondering what sort of risk management practices these CeDefi lenders have used, seeing as how the volatility of markets has deeply hampered their business.

The first domino to fall in the recent CeDefi implosion is Celsius. With Celsius, the financials of the company are not as clear, but they were the first platform to pause withdrawals. While many users know that if they aren’t your keys its not your crypto, many users were shocked that they couldn’t control the assets they thought were theirs. It has been reported that the company once valued at over $7 billion was in talks with FTX to help receive a bailout, but FTX walked away.

The rumors going around are Celsius was in the hole by up to $2 billion. The $20 billion in AUM also decreased to under $12 billion back in May (the last time Celsius gave an update). To come out of a bull market in the whole by billions is baffling many crypto enthusiasts on the longevity of Celsius’ business practices. Much of Celsius’ problems stem from their dependence on Lido’s stEth. This form of ETH offers yield on ETH in anticipation of the merge. Celsius converted most of their ETH to stETH to earn yield.

The problem is the price of stETH started to de-peg from the price of ETH, and Celsius was unable to sell their stETH without taking heavy losses. The loss in value led to Celsius not having enough assets to pay users seeking to withdraw their ETH, as it was now locked in the form of stETH. This inability to fulfill withdrawals is what led to Celsius suspending its platform. On top of their stETH problem, Celsius had exposure to 3AC, but the terms of their loan are not currently known.

After the Celsius disaster, many turned their eyes to a competitor in the space, BlockFi. With Celsius freezing withdrawals, fears quickly spread to those who had money in BlockFi. Some users started to flock towards the exits, even without hearing of any 3AC exposure. As things stand today, there have yet to be any freezes in withdrawals or suspension of any aspects of its products. Today, CEO Zack Prince even announced an increase in APYs for lending accounts and a reduction in withdrawal fees. However, many are taking this positive news lightly. This is because Prince also announced a deal with FTX to receive “a $400M revolving credit facility which is subordinate to all client funds, and an option for FTX to acquire BlockFi at a variable price of up to $240M based on performance triggers”. He also went on to detail that BlockFi’s exposure to 3AC led to $80 million in losses from an overcollateralized loan. Many were taken aback by this deal seeing as how BlockFi was recently valued in the billions. While these losses are substantial, they are not even close to losses that other competitors faced.

One of the largest companies affected by the collapse of 3AC was voyager. Voyager had lent out 15,250 BTC and $350 million USDC. That is a value of approximately $650 million. Voyager did not get a response from 3AC when Voyager asked for the money back, leading many to wonder how much if any will be paid back. This hurts, even more, when factoring in that Voyager only has $150 million in cash on hand. To stay afloat, Voyager sought a financial bailout, which they got from Alameda research, a company involving FTX CEO Sam Bankman-Fried. They received 15,000 BTC and $200 million cash/USDC. Additionally, Voyager reduced daily withdrawal limits from 25k to 10k, and then today, suspended withdrawals altogether! Here is a breakdown of the current Voyager financials released today: 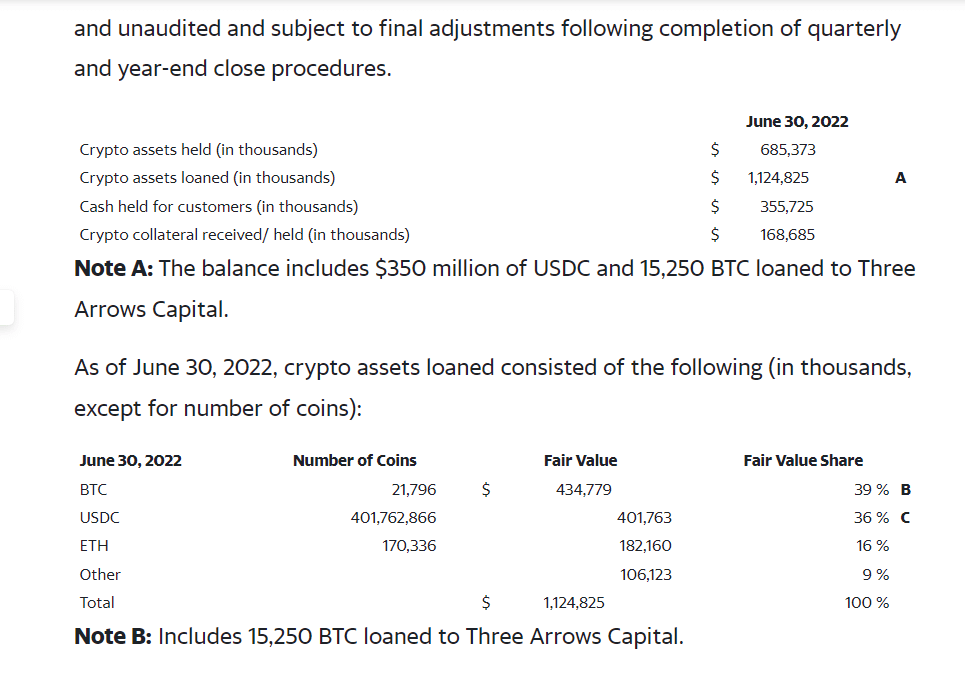 This shows that with the $1,124,825,000 that was loaned out, 3AC accounted for over half of the assets loaned. This sort of loan disbursement exposed Voyager to 3AC tremendously, and as a result, Voyager’s shares have plummeted 90% in the past month. A company that was once valued at over $1 billion is now valued at less than $100 million, with many uncertain if it can survive without a bailout.

One common thing among all lenders is they lent out large sums of money that have not yet been paid back. Nobody is currently sure what sort of research was done by CeDefi platforms prior to loaning out assets, and nobody knows what sort of risk management practices were in place. One thing that is certain is these platforms were inadequately prepared for the volatility that can be expected in crypto markets. With some companies restricting how much users can withdraw or whether they can withdraw at all, coupled with requiring bailouts from large companies, CeDefi has a lot of uncertainty in the space. Whether someone has assets in these entities or is just watching from the sidelines, everyone is left wondering where the space goes from here. If you put money in these places and the markets plunge even further, the 10% yields may not be enough to entice users to overlook the fear of having their assets frozen or seized by these institutions if they go under. Many expect changes going forward to prevent cascading events like this from happening again. Everyone is watching closely to see if or how these companies survive.

The One Word That Defines Ethereum’s Goals

Experts Predict How High Ethereum’s Price Could Go in 2022, a ‘Make-or-Break Year’

Why is Ethereum so popular for NFT projects?